Over the last couple of months I have been chasing the Northern Lights around the Arctic circle with minimal success but on the 1st of Mach 2011 when I stopped looking they decided to come to visit me!

On the day in question I had flown to Northern Ireland to visit my Aunty and we had a great day driving out to the coast looking at the huge waves break at Portballintrae we even had an ice cream, you’re probably thinking how could you possibly improve on that day? Well I often look at various websites showing geomagnetic levels and predicted Aurora levels and after a quick check on my phone at around 4pm It looked like something strong was brewing.

Tromsø Graph above and NOAA Aurora Doughnut below. 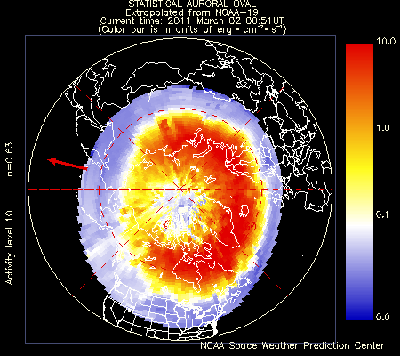 A large fast solar wind had hit earth’s magnetic field causing a geomagnetic storm that shifted the normal position of the Northern lights south. After looking over the available data I was convinced if I drove to the North coast of Ireland I would be sure to see the Northern Lights weather permitting. I asked my Aunty if I could borrow the car and she agreed reluctantly as I think she thought I was a crazy person suggesting that I was going to photograph the Northern Lights in Ireland.

I decided to head for my birthplace Ballycastle as it is nearly the most northern point of Northern Ireland. Even on the drive there I could see a large band of light in the night sky and I was sure it was the Aurora borealis,

When I reached Ballycastle I decided there was way too much light pollution from the Harbour so drove west along the Causeway Coastal road until I reached Carrick-a-Rede Rope Bridge car park. I parked up and jumped out of the car with excitement and there it was glowing bright about 35° above the horizon. When my eyes adjusted from the complete darkness I spotted Sheep Island and included this in most of the photographs from this location. Exposure was a complete nightmare all my photographs are totally under exposed due to the 8% moon that wasn’t even in the sky and zero light pollution, the only real light source was the light house on Rathlin Island. another problem I had was the fastest lens I had with me was a Ziess 50mm f/1.4 so in any exposures over 10 seconds the stars would move very noticeably. Even with a 30second exposure @ f/1.4 at ISO 1600 the images were still coming out dark. so I just had to balance the settings as best I could. I knew I wasn’t going to make a masterpiece but I was committed to recording this moment in time to the best of my ability.

I stayed at Carrick-a-Rede for about an hour before driving down to Ballintoy and having ago there but it was hard going with the horrible yellow lights so I decided to call it a night still feeling amazed I had even seen them at all!

Below are a selection of images from 1st March 2011 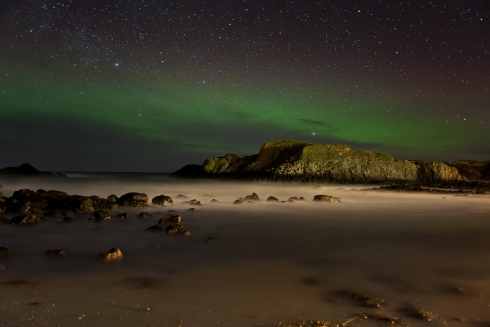 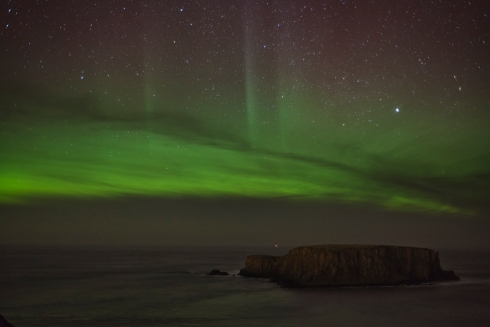 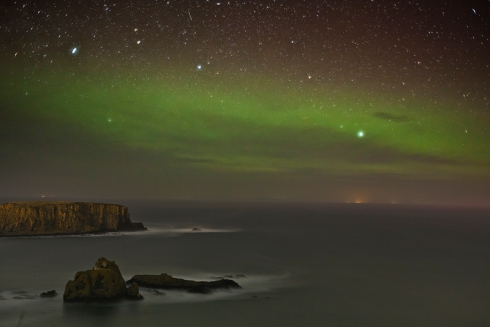 If your interested in chasing the Northern Lights I have listed some useful websites below,

or you could always follow me on Twitter @reedingram as if the Aurora is out in strength I will probably be talking about it!

Thanks for looking please feel free to leave a comment or message,